Griffon Hoverwork Ltd have embarked their most advanced 2000TD hovercraft demonstrator to the United Arab Emirates for sea trials.

The hovercraft is part of a capability package that has been assembled by companies from the United Kingdom’s BISEN consortium, supported by Her Majesty’s Government, and working in partnership with UAE businesses. The systems will be subjected to trials and evaluation by UAE and British users before being demonstrated at Abu Dhabi’s ISNR Exhibition between 15-17 March 2016.

On land, Weatherhaven’s deployable EH-MECC is a fully assembled, self contained mobile shelter which has been configured as the command post and is equipped with the same Detect and Respond System.  The command post receives the satellite broadcast data feed and video broadcast from the SkyRanger and hovercraft sensors for wider response team planning.  The EH-MECC is also configured for many other functions such as medical care, workshops and temporary accommodation.

The hovercraft is equipped with OTO Melara’s Hitrole system which provides a fully stabilized platform for the thermal and optical sensors and self defence systems.

The UK team has been working with two notable UAE businesses to prepare and conduct the demonstrations.  Siham Al Khaleej Technology are providing the Hitrole and the system assembly and operating base, and High Speed Craft are providing logistic support and local hovercraft expertise for the trials.

Siham Al Khaleej Technology and High Speed Craft are sharing the ISNR Stand Number CP 210 with the UK companies, whilst the hovercraft and its systems will be demonstrating in the surrounding waterways and live linked to the stand monitors. 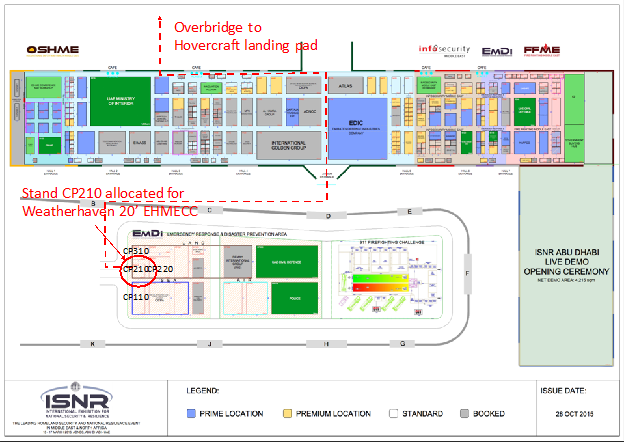 Links to the companies:

14Driving out Parkinson’s stigma in Africa supported by BISEN.
Having been diagnosed with Parkinson’s Disease, Guy Deaco…

14UK Hovercraft Arrives in Lagos.
Yesterday saw the launch and sea trials of a Griffon 2000TD hovercraft in Nigeria.  This …

14BISEN Joins Minister of State for Trade & Investment in Colombia.
The good relations between the United Kingdom and Colomb…

14Yeovil company plays role in hovercraft and drone 'detect and respond' safety system.
A BUSINESS from Yeovil will play…